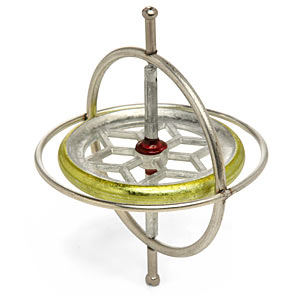 The centrifugal force of the gyroscope results in a normal force by the air, or by the Higgs bosons (in a vacuum),

and this force works on the horizontal circle of the gyroscope,

The normal force, which results from disturbing it’s erect position, could perhaps make the steering of some vehicles that don’t touch the ground possible. Like helicopters. Maybe we should somehow make an electrical gyroscope instead of the vacuum, but that would take batteries…

There maybe comes a point where it slows down.