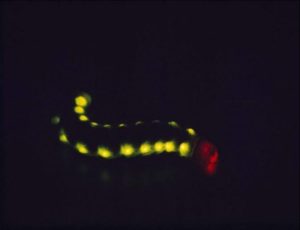 e oxygen that is connected to our hemoglobin, there also is free oxygen inside our blood. By exciting that oxygen with red light (the wavelength from the railroad worm isn’t told), then that oxygen will get extra chemical energy, because of it’s excited state as known, which means that pathogens will burn, because bacteria and viruses have a high distribution rate, due to their microscopic size, which means they burn relatively easily as known, because the content decreases to the power 3 (cubic), while the surface decreases to the power 2 (squared) as known.

We can manipulate anaerobic bile bacteria in order to let them glow red by using the gene or genes from the Railroad Worm from North America and South America. They are much smaller than the Railroad Worm, which means the light density from the maykin bacteria is higher. The maykin bacteria must be: Stored oxygen free, included in a probiotic oxygen free, and taken oxygen free as a probiotic, while we close our epiglottis by nipping your nose & drinking it, because injections in our behind are very humiliating. We could luckily include them in pills though. Of course, hoping that the glowing compound/compounds is/are an eggywhite/protein.

I assume that burning the pathogens is the evolutionary reason of the red glow from the Railroad worm by natural selection. 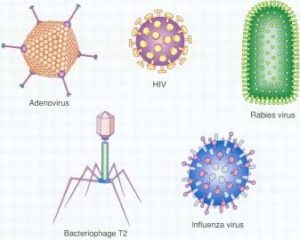 White blood cells don’t burn, and platelets are fragments of cytoplasm so, they don’t burn. They will shine through the pores of the bile wall, and I assume the light will pass through the thin flesh and the thin venous wall. 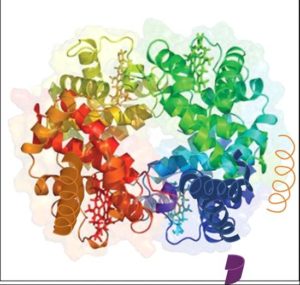 eggswhites/proteins are relatively long, and they curl up around eachother, which decreases their distribution rate for the width, while also blocking the supply of oxygen, and that luckily makes them hard to burn, neglecting hemoglobin, and they are normally of course digested before they are burned.

I doubt that the blood sugar will burn, because the enzyme (biological catalyst, although biological compounds normally don’t last that long) is absent inside our blood, because we don’t normally burn the blood sugar inside our blood, so, we can live in a symbiosis with those maykin bacteria. This would especially be suited for foreign planets or: Lyme disease, infectious mononucleosis, and emerging deadly viruses like: HIV, EHEC, and EVD (Ebola).

The maykin bacteria don’t cause themselves to burn, because digestive acids don’t contain oxygen. Oxygen will otherwise be bond into water together with the donated protons from the digestive acids. This also accounts for other bacteria and we’re better of with that.

The pathogens are moved by the blood circulation, and the red glow isn’t all reflected, because it shines through pores, and it is perhpas bright enough to shine trough some red blood cells.

This is majorly important during a viral epidemic, and the pathogens that abuse use as host would be exterminated, because they wouldn’t replicate, although I would rather save the pathogens in an isolated manner for observance.

We could however still get parasites of course.

We could perhaps bypass mutations by noticing where the red glowing eggywhite/protein is coded.

It should be used as a plan B, so only when we need to. I think it’s very important that they leave our body eventually,

so they must only be temporarily to develope a proper immune system, and eliminating pathogens probably messes with our sex drive too, but I guess that the bacteria can be retrieved from our intestines.

I wonder though if shining the same wavelength at our wrist as example would work with a higher intensity.

This is inspired by the goldfish with the red glow from the Big Bang Theory.

I suppose that the Corona virus is more negative, because it neglets oxygen, so I suppose to put hydrogen ions in our blood.