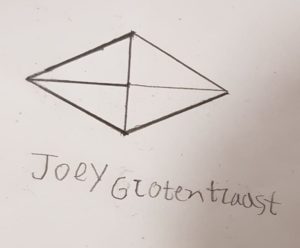 It took very long to get the drawing perfect.

I assume that we could use a glass bicone lens to capture every depth and angle, while using a regular positive lens after the bicone lens. I could all be sharp in all the angles, so it hopefully makes it anisotropic 3D by using ELECTRIC CAMERAS and SCREENS (film doesn’t work). We can maybe capture it on a fluorescent sheet like the one from electron microscopy by using a screen. We could also shove the fluorescent material into the camera like in Little Kitty from Avril Lavigne. It would especially be funny in Pisa. We can fabricate the cones by a 3D printer or a mold as example, and we should maybe cut the point, while we fuse them together into a bicone afterward. We don’t make half a cone of course. It’s for geometry.  I guess that the diameter of the base should be the same size as the cone’s height, so the angle of incidence stays the same for moving Δ horizontal and vertical together in the same rate. The angle of refraction also stays the same for moving Δ horizontal and vertical together in the same rate. Two dimensional I know, but that wouldn’t be that much of a difference. We should maybe block some light rays.

I assume that it uses the principal of commutative summations. The values of the first cone could be a range of 1-10 as example, while the second cone’s range is 10-1, so 1+10 = 10+1, and 5 + 6 = 6 + 5, because (5 = 1 + 4) & (6 = 10 – 4). The values are the travelled distance within the bicone lens after the lightrays hit the bicone lens, but 10 and 1 wouldn’t be the maximum and minimum values for one cone, unless they have a weird unit. In other words: long + short = short + long, so the total distance is always the same. I assume that reality is more like a light field than light rays though. Similar but different to the the particle/wave duality.

It’s ideal for people that enjoy 3D without glasses, but complain about getting eye seizures.

It is a worthy competitor of virtual reality and it’s really high quality too!!! It’s mostly suited for sports and we can sell it as a subscription. Taking 3D images/videos all the time is maybe overrated unless you photograph/tape sports or nature as example. A 3D book can also be nice.

Microscopic biology is definitely the best application, BUT THAT WASN’T MY IDEA (HELL NO). I WOULD LOVE TO SEE MORE OF THAT!!!

We can shove a light sensor into the microscope too, while using a screen to project it onto a fluorescent sheet. I don’t exactly know how the signal get’s send here. Somehow by satalites.

If we can’t create anisotropic data for the soccer club’s symbols without recording it then we can project the image on the grass with a beamer, although the soccer players could walk on the symbol and we don’t want to project it on them.

We could also mix 2D presentations with the anisotropic 3D presentations. It won’t be that bad when it’s done right. The soccer symbols maybe wouldn’t look great combined with a green screen or maybe it does.

I hope that we can edit the anisotropic 3D data, so we can add subtitles as example and it would be amazing if we could edit it LIVE. I suppose that editing the tape from the tape recorder is the best way to go. I was just talking about editing the tape at the time, but that’s pretty much the same.

We can also of course include

a traditional 2D option for the tower of Pisa as example, which means that the joke itself remains the same when the image is being viewed.

Another problem was: How are we supposed to provide the anisotropic 3D content to all the screens by using a single camera?

The answer was: We would use a CMC/CMCs (compact multiplication circuit/circuits), so a parallel circuit where every branch goes to a device, which shows visual data, while using appropriate amplifiers after each branch.

I know it’s complicated, but all the anisotropic 3D content only has to run through it once.

It has an extra delay (besides electromagnetism) for live broadcasts though, due to the speed of electricity, which means the multiplication circuit had to be as compact as possible,

so nanotechnology could be of assistance in order to reduce the delay to an acceptional level in the future, especially for sports. The transistors could maybe do the job. I guess by getting the transistors in a row for every branch, but I’m not completely sure. I of course assume that there needs to be an energy source to amplify from the base of the transistors.

The compact multiplication circuit can maybe be of use for the cassette tapes for the 3D model projections and television too. I guess afterward that it doesn’t has to be miniscule, but it would be better

Again, we can fabricate the cones with a 3D printer, while we fuse them together into a bicone.